Write in brief the structure of Spirogyra cell

Structure of Spirogyra cell:
(a) The body of the plant is filamentous.
(b) Each filament is long unbranched.
© It consists of number of cylindrical cells placed one above the other and the filament is covered over by mucilage.
(d) The cell wall is made up of cellulose and pectin.
(e) Each cell has a central vacuole, and several pyrenoid bodies.
(f) A prominent nucleus is found in the middle of the
cell suspended by cytoplasmic strands. -
(g) Each cell has chloroplast in the form of spiral hence the name Spirogyra is given 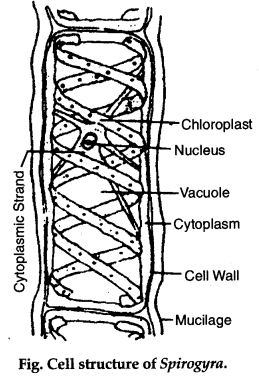