With the help of labelled diagram describe in brief the Rutherford's alpha particle scattering experiment. Write any three important conclusions drawn from the experiment

Rutherford took a very thin gold foil and bombared it with alfa - particles. He observed that:
(i) Most of the fast moving a - particles passed straight through the gold foil.
(ii) Some of the alpha particles were deflected by the foil by small angle.
(iii) Out of every 12000 particles, one appeared to rebound.
From the above observations be concluded:
(i) There is a positively charged centre in an atom called the nucleus. Nearly all mass of an atom resides in the nucleus. 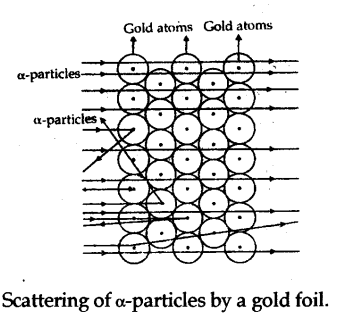