Why does the reactivity of nitrogen different from phosphorus?

(i) Why does the reactivity of nitrogen different from phosphorus?
(ii) Can $PC{{l}_{5}}$ act as an oxidising as well as reducing agent?

(i) Nitrogen exists as a diatomic molecule with a triple bond between two N-atoms. The bond dissociation enthalpy of this triple bond (N = N) is very high (941.94 kj mol-1) due to which nitrogen is inert and unreactive at room temperature.
It contrast, phosphorus exists as a tetra-atomic molecule (P4). As P—P bond is much weaker than N=N bond, therefore P—P bond can be broken easily and hence, phosphorus is much more reactive than nitrogen.
(ii) The oxidation state of P in PCl5 is +5. Since, P has five . electrons in its valence shell. Therefore, it cannot
increase its oxidation state beyond +5 by donating electrons, therefore, PCl5 cannot act as a reducing agent. However, it can decrease its oxidation state from +5 to +3 or some lower value, therefore it can act as an oxidising agent, e.g. PC15 oxidises Ag to AgCl, Sn to SnCl4, H2 to HCl 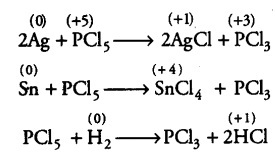