What is the structure of ribosome ? Name two organelles of the cytoplasm in which they are found

Ribosomes : (a) These are granular organelles which are not enclosed by any membrane.
(b) These are found either in free state in the cytoplasm or attached to the endoplasmic reticulum.
© The ribosomes found in mitochondrial matrix and chloroplast stroma are much smaller.
(d) Ribosomes are commonly called as cell engines as they are the sites of protein synthesis. 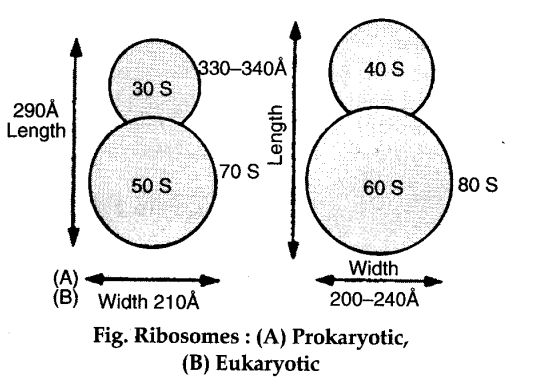 (e) Under electron microscope, they appear as spherical bodies of about 150A to 250A in diameter. Ribosomes are composed of roughly equal amount of protein and RNA.
(f) The ribosomes consist of two unequal sized units arranged on top of each other. The eukaryotic cells have large ribosomes than prokaryotic cells.
(g) 70S ribosomes have two sub-units 50S and 30S
while 80S ribosome have larger 60S and smaller 40S sub-units.