What is the force F? on the 1.0 nC charge in (Figure 1) ? Determine the magnitude of the force F? 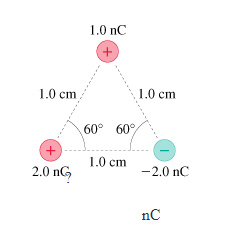 Here, k is the proportionality factor and possess a constant value for a medium.

Consider three charges placed at the corners of an equilateral triangle.
Let the direction of positive x- axis be along right and positive y-axis be upwards.

Explanation:
The magnitude of electrostatic force is directly proportional to the product of the magnitude of two charges and the direction depends on the sign of the charges involved.