What is photoelectric effect? explain briefly: 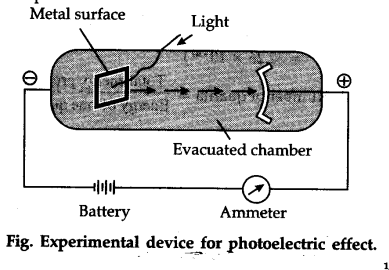 “The phenomenon of ejection of electrons from the surface of a metal when light of suitable frequency strikes on it, is called photoelectric effect.
The emitted electrons are called photoelectrons.”
Experimental studies of photoelectric effect under different conditions led to the following important observations—
(i) The electrons are ejected from the metal surface as soon as the beam of light strikes the surface. .
(ii) For each metal, certain minimum frequency of
light is needed to eject the electrons. This is known as threshold frequency and it is different for different metals.
(iii) The kinetic energy of the ejected electrons is
directly proportional to the frequency of the incident radiation and it is independent of its intensity.
(iv) The number of electrons ejected per second from the metal surface depends upon the intensity or brightness of incident radiation but does not depend upon its frequency