What is phloem ? Explain its components

Phloem : Phloem is a complex permanent tissue, which is meant for the conduction of food within the plant. It is also called bast or laptone. Phloem consists of four types of cells :
(a) Sieve elements: They are the main food conducting elements and are of two types-sieve cells and sieve tubes.
(i)Sieve cells: They are elongated cells having several perforated areas called sieve areas,
(ii) Sieve tubes : They are elongated tubular channels.Each sieve tube is made up of several cells called sieve tube members. The end walls have many large pores or sieve pits and are known as sieve plates. Each sieve tube is always associated with a companion cell. Sieve element take part in the transport of organic food.
(b) Companion cells : They are elongated thin walled parenchymatous cells, which lie on the sides of the sieve tubes. They are closely associated with the sieve tubes. The companion cell and a sieve tube originate from the same mother cell. The companion cells play an important role in the maintenance of a pressure gradient in the sieve tubes.
© Phloem parenchyma: They are ordinary parenchyma cells, which are intermingled with sieve elements.They store food and also assist in the conduction of food in lateral direction.
(d) Phloem fibres : They are also called bast fibres.Phloem fibres are sclerenchymatous fibres, which occur in phloem. They provide mechanical strength. The textile fibres of flex, hemp and jute are phloem fibres. 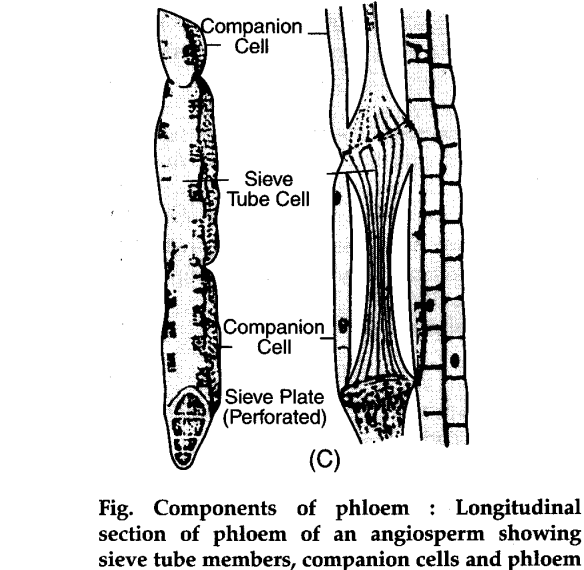