What is nitrogen cycle? Explain with a diagram

What is nitrogen cycle? Explain with a diagram.

Nitrogen gas makes up around 78% of our atmosphere. It forms a part of many molecules like proteins, nucleic acid and some vitamins. Nitrogen is also found in other biologically important compounds such as alkaloids and urea. Nitrogen is thus an essential nutrient for all life forms. 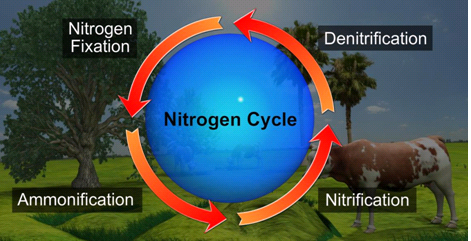 The sequence in which nitrogen in the atmosphere is passed into the soil and life forms, and then released back into the atmosphere, is called the nitrogen cycle.
a) Nitrogen is introduced to the soil by fertilizers or animal and plant residues. Bacteria in the soil convert the nitrogen to ammonium and nitrate, which is taken up by the plants by a process of nitrogen fixation.
b) Ammonification: The process of the production of ammonia from organic compounds is called ammonification. Ammonification is the process — carried out by a variety of microorganisms — that breaks down proteins, amino acids, and other nitrogen-containing compounds in dead and waste organic matter to form ammonia.
c) Nitrification: It is the process by which ammonia is converted to nitrites (NO2-) and then to nitrates (NO3-). This process naturally occurs in the environment, where it is carried out by specialized bacteria.
d) Denitrification: It is the biological conversion of nitrate to nitrogen gas, nitric oxide or nitrous oxide. These compounds are gaseous compounds and are not readily available for microbial growth; therefore they are typically released to the atmosphere. Nitrogen gas makes up over 78% of atmospheric gases, thus the release of N2 to the atmosphere is benign.