What is alternation of generation?Explain it with an example and a diagram

What is alternation of generation? Explain it with an example and a diagram.

In plants, both haploid and diploid type of cells can divide by mitosis. This ability leads to the formation of two plant bodies - haploid and diploid. The haploid plant body produces gametes by mitosis and is termed as gametophyte. After fertilisation, the zygote also divides by mitosis to produce a diploid sporophytic plant body. Haploid spores are produced by this plant body by meiosis, which in turn, divide by mitosis to form a haploid plant body once again. Thus, during the life cycle of any sexually reproducing plant, there is an alternation of generation between gamete producing haploid gametophyte and spore producing diploid sporophyte.

A) Haplontic life cycle: Sporophytic generation is represented only by the one-celled zygote. There are no free-living sporophytes. Meiosis in the zygote results in the formation of haploid spores. The haploid spores divide mitotically and form the gametophyte. The dominant, photosynthetic phase in such plants is the free-living gametophyte. This kind of life cycle is termed as haplontic. Many algae such as Volvox , Spirogyra and some species of Chlamydomonas represent this pattern. 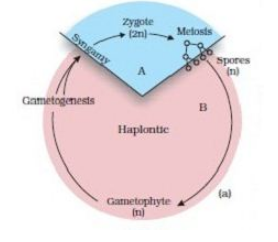 B) Diplontic life cycle: The diploid sporophyte is the dominant, photosynthetic, independent phase of the plant. The gametophytic phase is represented by the single to few-celled haploid gametophyte. This kind of lifecycle is termed as diplontic. All seed-bearing plants i.e. gymnosperms and angiosperms, follow this pattern. 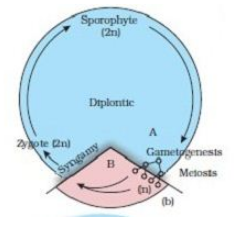 C) Haplo-diplontic life cycle: Bryophytes and pteridophytes, interestingly, exhibit an intermediate condition (haplo-diplontic); both phases are multicellular and often free-living. However, they differ in their dominant phases. 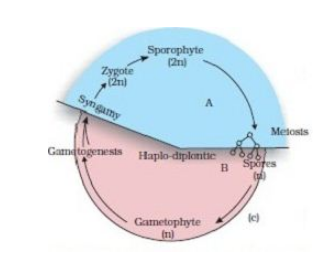