What is the total work done by the two tugboats on the supertanker?
Express your answer in joules, to three significant figures. 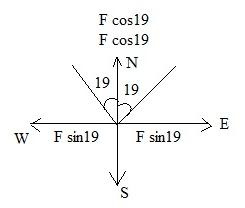 from figure , the horizontal forces are same in magnitude and opposite direction.
so , neglect these two forces.
we can take only vertical components of the force.