Two friends are trying to push a heavy load as shown in figure. Suggest a way which
will make this task easier for them. 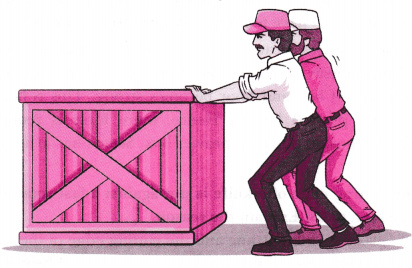 Answer:
They can put rollers below the heavy load. Because, friction arises when the irregularities in the surfaces of two objects in contact get interlocked with each other. In rolling, the time given for interlocking is very small than sliding. Hence, interlocking is not strong. Therefore, less force is required to overcome it and the task becomes easier. Since, the rolling friction is smaller than the sliding friction putting rollers below the heavy load will make the task easier for them.