The bob A of" a pendulum released from 30° to the vertical hits another bob B of the same mass at rest on a table as shown in figure given below. How high does the bob A rise after the collision ? Neglect the size of the bobs and assume the collision to be elastic. 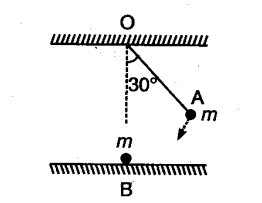 It is quite clear that in perfectly elastic head on collision, when two equal masses collide with each other, then they exchange their speeds.
In the present case, bob A is moving with certain speed and bob B is at rest. So after collision, bob A comes to rest and the bob B starts moving with the speed of the bob A. The bob A transfers whole of its momentum to bob B and so, bob A, will not rise at all after the collision. 2
Note : The Bob shall not rise because when two bodies of same mass undergo an elastic collision, there velocities are interchanged and Ball A rests and Ball B moves.