Suggest a suitable physical situation for each of the following graph

Suggest a suitable physical situation for each of the following graph. 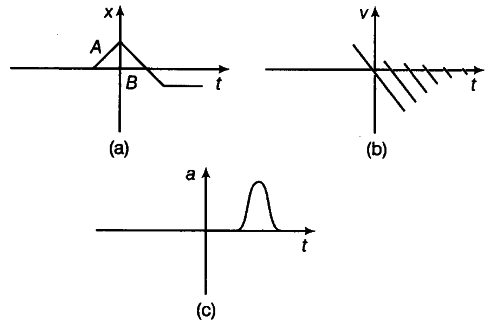 (i) In Fig- (a), the x-t graph shows that initially x is zero i.e. at rest, then it increases with time, attains a constant value and again reduces to zero with time, then it increases in opposite direction till it again attains a constant value i.e. comes to rest.
The similar physical situation arises when a ball resting on a smooth floor is kicked which rebounds from a wall with reduced speed. It then moves to the opposite wall which stops it.
(ii) In Fig. (b), the velocity changes sign again and again with passage of time and every time some speed is lost. The similar physical situation arises when a ball is thrown up with some velocity, returns back and falls freely. On striking the ground, it rebounds with reduced speed each time it strikes against the ground.
(iii) In Fig. ©, initially the body moves with uniform velocity. Its acceleration increases for a short duration and then falls to zero and thereafter the body moves with a constant velocity. The similar physical situation arises when a cricket ball moving with a uniform speed is hit with a bat for a very short interval of time.