State the law of conservation of mass. Describe its experimental verification

State the law of conservation of mass. Describe its experimental verification.

Procedure: A specially designed H-shaped tube is taken. Sodium chloride solution is taken in one limb of the tube and silver nitrate solution in the other limb as shown in figure. Both the limbs are now sealed and weighed. Now the tubes is averted so that the solutions can mix up together and react chemically. The reaction takes place and a white precipitate of silver chloride is obtained.

Silver nitrate Sodium chloride Silver chloride Sodium nitrate
The tube is weighed again. The mass of the tube is found to be exactly the same as the mass obtained before inverting the tube. Thus, this experiment clearly verifies the law of conservation of mass 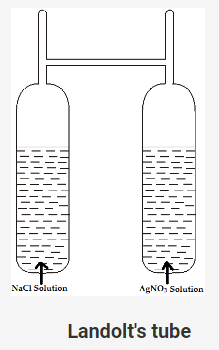