Predict the major organic product of the following reaction and complete its mechanism below. Complete the curved-arrow mechanism for the scheme below by adding any missing atoms, bonds, charges, nonbonding electrons, and curved arrows. 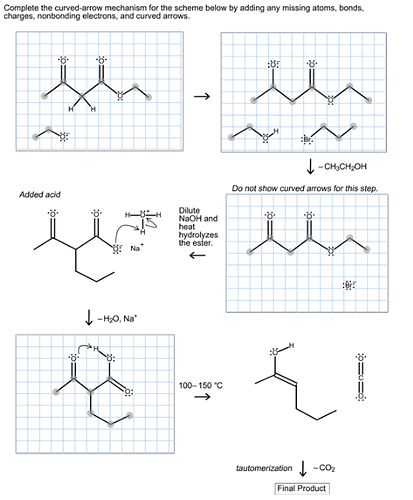 Concepts and reason
The concept used to solve this problem is acetoacetic ester synthesis, which is used for the conversion of ethyl acetoacetate into a ketone that has one or two alky groups on the alpha carbon atom.

Fundamentals
The starting material in acetoacetic ester synthesis is beta keto ester and the product must be a ketone but not the carboxylic acid.

The reaction is as follows: 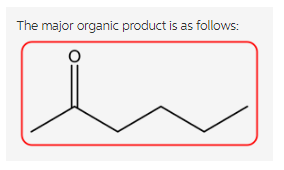 Explanation:
Ethyl acetoacetate reacts with strong base forms a resonance-stabilized enolate ion followed by the reaction with propyl bromide forms a substitution product. Now, the aqueous acid hydrolyzes the ester to the beta keto acid followed by the decarboxylation gives ketone in the product.

The mechanism is as follows: 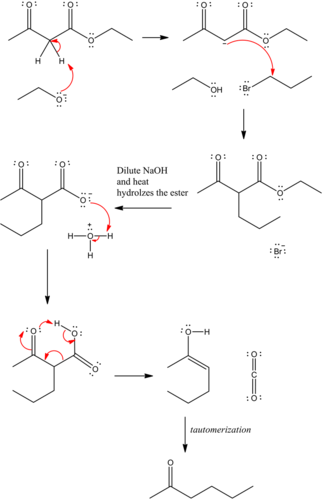 The curved arrow representation for the mechanism is as follows: 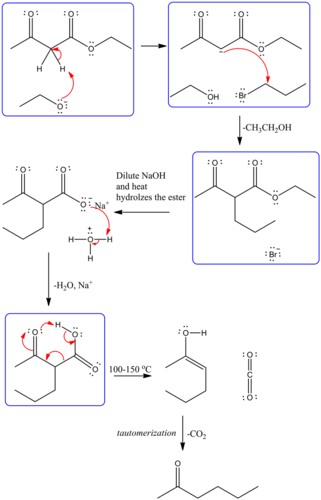 Explanation:
The strong base, ethoxide ion, remove the acidic proton between the two carbonyl groups and nucleophile enolate that reacts with propyl bromide followed by the base hydrolysis of ester and then protonation with aqueous acid forms an acid. Then by heating decarboxylation takes place and forms an enol, which undergoes tautomerization to yield the desired compound.