Paheli set up an experiment using liquid A in the beaker as shown in figure below. She observed that the bulb glows. Then she replaced the liquid A by another liquid B. This time the bulb did not glow. Boojho suggested replacing the bulb by an LED. They observed that the LED glows. Explain. 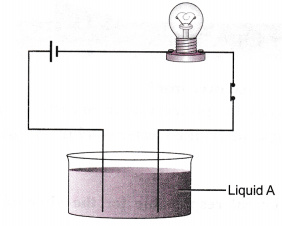 Answer:
The current through liquid B could be weak and therefore unable to make the bulb glow. However, it was strong enough for the LED to glow.