Ions of an element of group 1 participate in the transmission of nerve signals and transport of sugars and amino acids into cells. This element imparts yellow colour to the flame in flame test and forms an oxide and a peroxide with oxygen. Identify the element and write chemical reaction to show the formation of its peroxide. Why does the element impart colour to the flame?

Yellow colour flame in flame test indicates that the alkali metal must be sodium. It reacts with 02 to form a mixture of sodium peroxide, and sodium oxide. 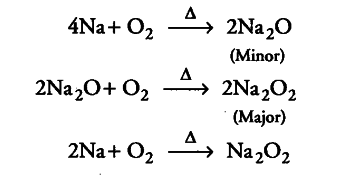 Ionisation enthalpy of sodium is low. When sodium metal or its salt is heated in Bunsen flame, the flame energy causes an excitation of the outermost electron which on reverting back to its initial position gives out the absorbed energy as visible light. That’s why sodium imparts yellow colour to the flame.