How are block mountains formed? Explain with the help of a diagram

How are block mountains formed? Explain with the help of a diagram.

Block Mountains are formed when two tectonic plates move away from each other causing cracks on the surface of the Earth. When parallel cracks or faults occur, the strip of land or the block of land between them may be raised resulting in the formation of block mountains. The upward block is called a horst. Examples, Black forest and the Vosges of Rhineland.

Block mountains are also formed when the crust of the Earth sinks on both sides of two parallel faults. Therefore, a block mountain can be found between two rift valleys. The land which sinks is known as graben. Examples, East African rift valleys. 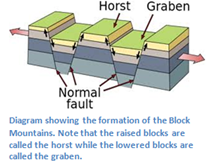