Explain why do stars twinkle and planets do not?

The twinkling of a star is due to atmospheric refraction of starlight. The starlight, on entering the earth’s atmosphere, undergoes refraction continuously before it reaches the earth. The atmospheric refraction occurs in a medium of gradually changing refractive index. Since the atmosphere bends starlight towards the normal, the apparent position of the star is slightly different from its actual position. The star appears slightly higher (above) than its actual position when viewed near the horizon. 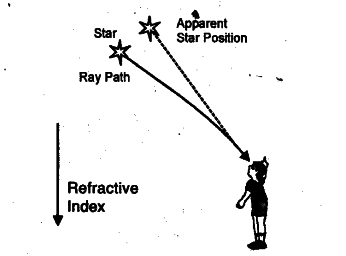 Further, this apparent position of the star is not stationary, but keeps on changing slightly, since the physical conditions of the earth’s atmosphere are not stationary. Since the stars are very distant, they are approximate point-sized sources of light. As the path of rays of light coming from the star goes on varying slightly, the apparent position of the star fluctuates and the amount of starlight entering the eye flickers i.e., the star sometimes appears brighter, and at some other time, fainter, which is the twinkling effect.
The planets are much closer to the earth, and are thus seen as extended sources. If we consider a planet as a collection of a large number of point-sized sources of light, the total variation in the amount of light entering our eye from all the individual point-sized sources will average out to zero, thereby nullifying the twinkling effect.

Actually stars also do not twinkle they Are far away from us hence after atmospheric refration they seems to be twinkling .
On the other hand the planets are closer to the earth than the stars hence they do not face much refraction and do not observes as twinkling

Stars are present very far away from the earth. They are visible as point sources. The light rays which come from them, get refracted many times before they reach our eyes. Due to this, stars seem to be blinking or twinkling. Planets on the other hand, are located near to us, relatively to stars. So the diffraction of light does not occur much and planets do not seem to twinkle