Explain, using suitable diagram, the difference in the behaviour of a

(i) Explain, using suitable diagram, the difference in the behaviour of a
(a) conductor and
(b) dielectric in the presence of external electric field. Define the terms polarisation of a dielectric and write its relation with susceptibility.

(ii) A thin metallic spherical shell of radius R carries a charge Q on its surface. A point charge Q/2 is placed at its centre C and an another charge +2 Q is placed outside the shell at a distance x from the centre as shown in figure. Find (a) the force on the charge at the centre of the shell and at point A, (b) the electric flux through the shell.

(i) (a) When a capacitor is placed in an external electric field, the free charges present inside the conductor redistribute themselves in such a manner that the electric field due to induced charges opposes the external field within the conductor. This happens until a static situation is achieved, i.e. when the two fields cancel each other and the net electrostatic field in the conductor becomes zero.

Both polar and non-polar dielectrics develop net dipole moment in die presence of an external field. The dipole moment per unit volume is called polarisation and is denoted by P for linear isotropic dielectrics.

(ii) (a) At point C, inside the shell.
Electric field inside a spherical shell is zero.
Thus, the force experienced by charge at centre C will also be zero. 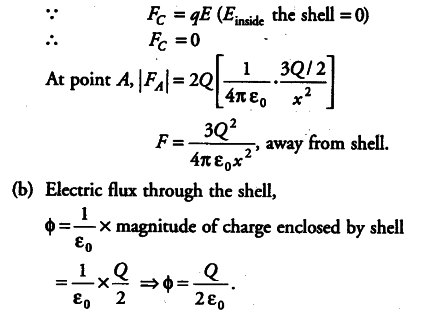