Explain the various heat zones of the Earth with the help of a diagram.

The fact that the Earth is spherical in shape results in different parts of the Earth getting heated differently. Based on the heat received from the Sun, the Earth is divided into three heat zones. They are:

Torrid zone : It is a region between the Tropic of Cancer and the Tropic of Capricorn. This region receives the direct vertical rays of the Sun for almost the whole year. Therefore, this zone gets the maximum heat from the Sun. This zone is known as the torrid or the tropical zone.

Temperate Zone : This zone lie between the Tropic of Cancer and the Arctic Circle in the Northern Hemisphere and between the Tropic of Capricorn and the Antarctic Circle in the southern hemisphere. This zone gets the slanting rays of the Sun as the angle of the Sun’s rays goes on decreasing towards the Poles. Thus this zone experiences moderate temperature. 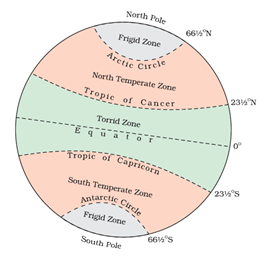