Explain the three zones of a flame by taking the example of candle flame.

The different zones of a candle flame can be described as follows:

1. The innermost zone: The innermost zone is the zone which is formed just around the wick of the candle flame as the candle burns. It is also known as dark zone of the flame. It consists of hot, unburnt vapours of the combustible material. There is no air present here. It is the least hot of all the zones.

2. Middle zone: The middle zone also known as luminous zone is the zone which is moderately hot with limited oxygen supply. Hence, the fuel vapours burn partially and produce carbon particles. These particles then leave the flame as smoke and soot. This zone is the major part of the flame. The colour of this zone is yellow. 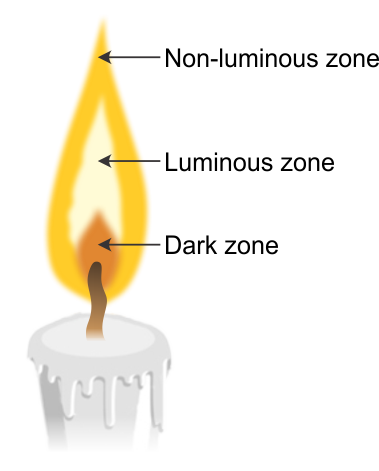