Structure of Pancreas : The pancreas lies inferior to the stomach in the first C-shaped bend of the duodenum. It acts both an exocrine and endocrine gland. The tissue of the pancreas has an addition i to the acinar cells, groups of cells called islets of Langerhans, which produce endocrine secretions. : Four kinds of cells have been identified in the islets : (a) Alpha cells produce glucagon, (a) Beta cells produce insulin, © Delta cells produce somatostatin, (d) PP cells produce pancreatic polypeptide.
Hormone of Pancreas and their Roles:
(a) Glucagon.: It stimulates the liver to convert stored
glycogen into glucose. It is controlled by feedback in accordance with the glucose in the blood.
(b) Insulin : It is antagonistic to glucagon. Insulin decreases the level of glucose in the blood. It acts by increasing the rate of which glucose is transported out of the blood and into cells and by stimulating muscles cells to take up sugar from the blood and convert it to glycogen. Insulin also promotes protein synthesis in tissue from amino acids. It reduces catabolism of proteins. It is an anabolic hormone.
© Somatostatin : It suppresses the release of other
hormones from the pancreas. It also appears to suppress the release of hormone from the digestive tract.
(d) Pancreatic polypeptide : It appears that pancreatic
polypeptide inhibits the release of digestive secretion of the pancreas. 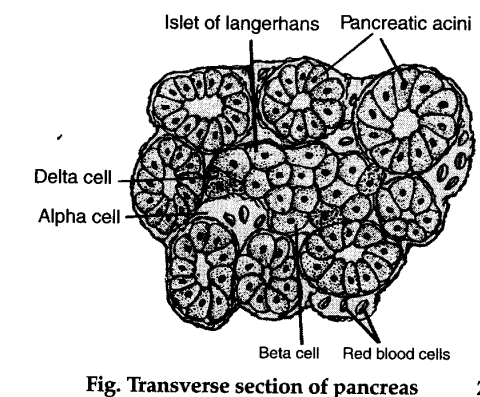