Explain the structure of brain with the help of diagram

The human brain is divisible into three parts:
(a) Fore brain (Prosencephalon):
(i) Olfactory lobes : Each lobe consists of two parts, an anterior olfactory bulb and a posterior olfactory tract. They are fully covered by the cerebral hemispheres.
(ii) Cerebrum: The cerebrum is the largest part of the human brain. It consists of left and right hemispheres connected by a large bundle of myelinated fibres, the corpus collasum and other smaller fibre bundles. The outer portion of cerebrum is called the cerebral cortex that makes up the grey matter of the cerebrum. There are three general kinds of cortex: sensory, motor and associative. Beneath the grey matter, the large concentration of medullated nerve fibres gives this tissue an opaque white appearance, collecting called white matter. Each cerebral hemisphere is divided into four lobes : frontal, parietal temporal and occipital lobe.
(iii) Diencephalon: Its main parts are epithalamus, thalamus and hypothalamus. Epithalamus is thin and not formed of nervous tissue. Hypothalamus is relatively small but it is highly vascular. 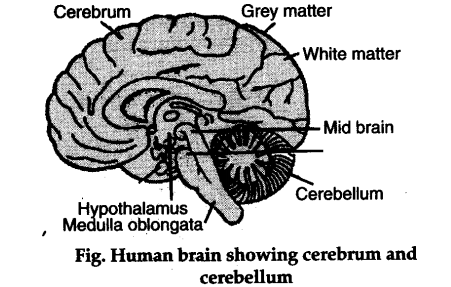 The thalamus lies superior to mid brain is composed primarily of grey matter.
(b) Mid brain (Mesencephalon): It consist of 2 parts : (i). Corpora quadrigemina : The upper surface of the mid brain has two pairs of rounded pro¬trusions, the one is superior colliculi and the other is inferior colliculi, collectively called as corpora quadrigemina Cerebral peduncles : These are two bundles of f . fibres which lie on the lower or inferior surface i
of the mid brain.
© Hind brain (Rhombencephalon) : It consists of three parts:
(i) Cerebellum: It is the second largest part of the human brain. It is well developed and consists of two lateral cerebellar hemisphere and central worm like part, the vermis. It has grey matter comprised of 3 layers in which the middle layer contains flask shaped Purkinje cells.
(ii) Pons varolli : It is situated in the front of cerebellum which consists of mainly nerve fibres which form a bridge between the two ; cerebellar hemisphere and of fibres which pass between the higher levels of the brain and spinal cord.
(ii) Medulla oblongata : It extends from pons varolii to the spinal cord. Its shape is like a pyramid. It has a very thin, non-vascular folded structure on its lower side called the posterior choroid plexus