Explain the sense of smell (olfaction)

Sense of smell (olfaction) : Nose contains the receptors of smell, in the mucous coated thin, yellowish patch of modified pseudo stratified epithelium called olfactory epithelium. It is located way up at the roof of the nasal cavity on either sides 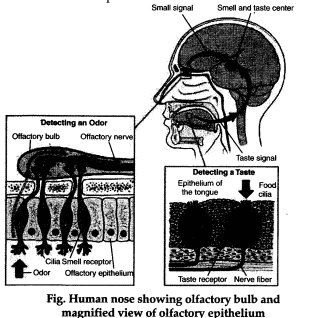 The olfactory epithelium contains three types of
cells: (a) millions of olfactory receptor cells; (b)
columnar supportive cells; © short basal cells.
Olfactory receptors are unusual bipolar sensory
neurons. The thin dendrites of each of these
neurons run to the surface of the epithelium
where these bear a cluster of about 20 modified
cilia which function as receptor sites. These cilia extend from the olfactory epithelium into the thin coat of nasal mucous secreted by the supportive cells and olfactory glands. This mucous is a solvent that captures and dissolves the air borne odour molecules. Once dissolved, the chemicals bind to the specific receptors on the cilia stimulating the receptor cells. This causes depolarization and ultimately action potential in the receptor ceil. The axons of the olfactory receptors unite to form the olfactory nerve which transmits the information directly to the overlying olfactory bulb, a relay station in the brain. Unlike receptor ends of other
senses, the axons of the olfactory receptors directly extend from the outside environment (the nasal
cavity) into the olfactory bulb, a part of the brain.
The number of receptors stimulated indicates the
strength of the stimulus.
As with taste, some of the smell, can be really , painful. The nasal cavity contains pain receptors that respond to irritants such as ammonia, vinegar
or hot chilly pepper. Impulses from these pain
receptors reach the brain. The brain combines these sensations with those of smell to identify the
odours. Although humans do have a good sense of smell - we can detect about 10,000 different odours.
Our olfactory capability is not as good as those of
many vertebrates, especially fish and mammals such as a dog.