Explain the principle on which Van de Graaff generator operates

Explain the principle on which Van de Graaff generator operates. Draw a labelled schematic sketch and write briefly its working.
OR
State and pove Gauss theorem in electrostatics.

Van de Graaff, in 1931 designed an electrostatic generator which is capable of producing very high potential of the order of 10 MV. 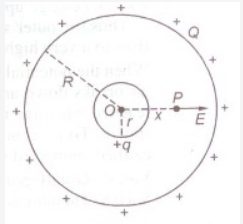 Principle: Suppose we have a large spherical conducting shell of radius R, carrying charge Q. The charge spreads uniformly over whole surface of the shell. Now suppose a small conducting sphere of radius ‘r" is introduced inside the spherical shell and placed at its centre, so that both the sphere and shell have same center O. The electric field in the region inside the small sphere and large shell is due to charge +q only, so electric field strength at a distance x from the center O is 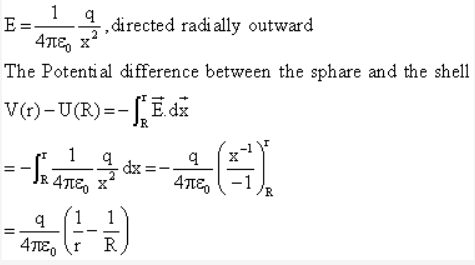 This is independent of charge Q on the large spherical shell. As r 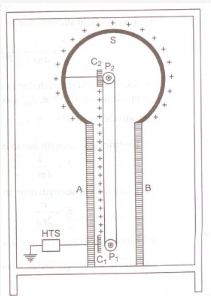 It consists of a large hollow metallic sphere S mounted on two insulating columns A and B and an endless belt of rubber or silk is made to run on two pulleys P1and P2 by the means of an electric motor. C1 and C2 are two sharp metallic spikes in the form of combs. The lower comb C1 is connected to the positive terminal of a very high voltage source (HTS) (=104 volts) and the upper comb C2 is connected to the inner surface of metallic sphere S.

When C1 is given very high potential, then it produced ions in is vicinity, due to action of sharp points. The positive ions, so produced, get sprayed on the belt due to the repusion between positive ions and comb C1. These positive ions are carried upward by the moving belt. The pointed end of C2 just touches the belt. The comb C2 collects positive charge from the belt which immediately moves to the outer surface of sphere S. As the belt goes on revolving, it continues to take (+) charge upward, which is collected by comb C2 and trasferred to outer surface of sphere S. Thus the outer surface of metallic sphere S gains positive charge continuously and its potential rises to a very high value.

When the potential of a metallic sphere gains very high value, the dielectric strength of surrounding air breaks down and its charge begins to leaks, to the surrounding air. The maximum potential is reached when the rate of leakage of charge becomes equal to the rate of charge transferred to the sphere. To prevent leakage of charge from the sphere, the generator is completely enclosed in an earth connected steel tank which is filled with air under high pressure .