Explain the life cycle of Pine 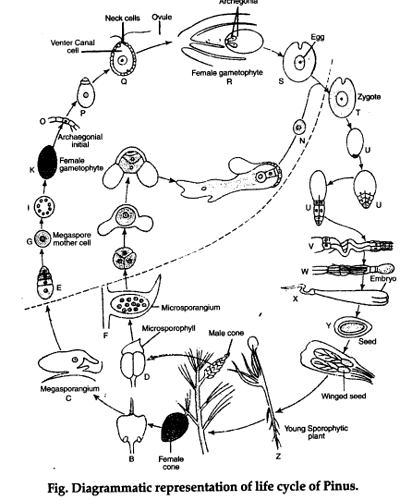 Life-cylce-of-pinus.png433×541 42.6 KB
(e) Microgametophyte has two wings and is carried by wind to the seed cone during pollination.
(f) Seed cones are larger than pollen cones. They are located near the tip of branch.
(g) Each scale/megasporophyll of seed cone has two ovules which lie on upper surface.
(h) Each ovule is surrounded by a thick layered integument having an opening at one end. The ovule has the megasporangium within it.
(i) The megaspore mother cell in the megasporangium undergoes meiosis division to form four megaspores. Only one of these spores develops into a megagametophyte with two to six archegonia, each containing a single large egg lying near the ovule opening.
(j) Pollen grain develops pollen tube that slowly moves towards megagametophyte. Pollen tube discharges 2 non-flagellated sperms.
(k) One of these fertilizes an egg in an archegonium while the other degenerates.
(l) Fertilization occurs after one year of pollination.After fertilization, ovule matures and becomes the seed.
(m) Seed consists of the embryo, reserve food and seed coat. In the fall of second season, seed cone becomes non-woody and hard. It opens to release winged seed.
(n) When the seed germinates, the sporophyte embryo develops into a new pine tree and thus the cycle is completed.