Explain the concept of deficient demand

Explain the concept of deficient demand in macroeconomics. Also explain the role of bank rate in correcting it. 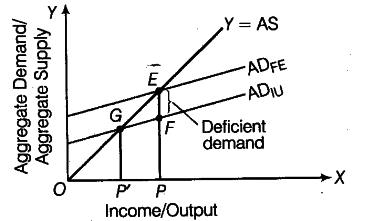 Where {{AD}_{FE}} = AD at full employment
{{AD}_{IU}} = AD at involuntary unemployment
EF = Deficient demand/deflationary gap
Role of Bank Rate in Correcting the Problem of Deficient Demand
The rate at which the Central Bank lends money to commercial banks is termed as bank rate. In case of deficient demand, the Central Bank reduces the bank rate to increase the money supply in the economy. Reduction in bank rate increases the credit/money creation capacity of commercial banks and also reduces the market rate of interest which encourages people to borrow more. In this way, the Aggregate Demand increases to the level of Aggregate Supply and the economy attains equilibrium.