Explain the carbon cycle with the help of a diagram

Explain the carbon cycle with the help of a diagram 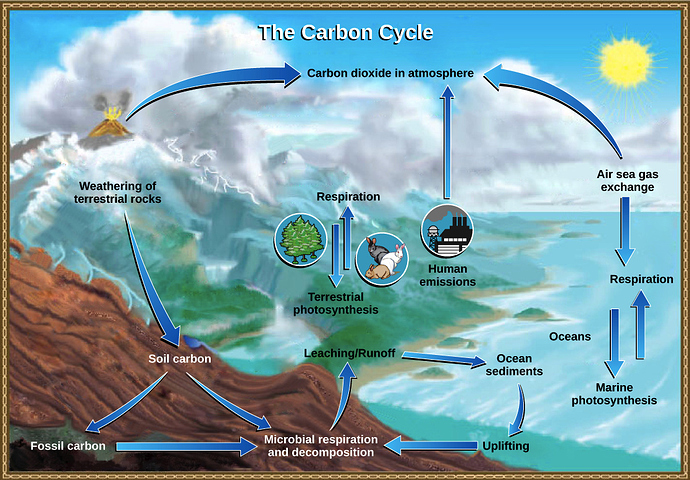 Carbon is an essential element in the bodies of living organisms. It is also economically important to modern humans, in the form of fossil fuels.

● Carbon dioxide CO2 from the atmosphere is taken up by photosynthetic organisms and used to make organic molecules, which travel through food chains. In the end, the carbon atoms are released as CO2 in respiration.

● Slow geological processes, including the formation of sedimentary rock and fossil fuels, contribute to the carbon cycle over long timescales.

● Some human activities, such as the burning of fossil fuels and deforestation, increase atmospheric CO2 and affect Earth’s climate and oceans.

The carbon cycle is most easily studied as two interconnected subcycles:

● One dealing with rapid carbon exchange among living organisms

These cycles are linked. For instance, the same pools of atmospheric CO2 and oceanic that are utilized by organisms are also fed and depleted by geological processes. As a brief overview, carbon exists in the air largely as carbon dioxide CO2 gas, which dissolves in water and reacts with water molecules to produce bicarbonate CaCO3.Photosynthesis by land plants, bacteria, and algae converts carbon dioxide or bicarbonate into organic molecules. Organic molecules made by photosynthesizers are passed through food chains, and cellular respiration converts the organic carbon back into carbon dioxide gas. Long-term storage of organic carbon occurs when matter from living organisms is buried deep underground or sinks to the bottom of the ocean and forms sedimentary rock. Volcanic activity and, more recently, human burning of fossil fuels bring this stored carbon back into the carbon cycle. Although the formation of fossil fuels happens on a slow, geologic time scale, the human release of the carbon they contain CO2 is on a very fast timescale.