Communication through the scalar chain may involve delays when two subordinates or employees at the same level want to exchange ’ information. Thus, Fayol suggested the concept of ‘Gang Plank’ to avoid delays and allow direct communication between two subordinates at the same level. Gang Plank is useful as it helps in making direct contact in case of emergency. This idea of Fayol shows that his principles are flexible and can be modified as per the situation. 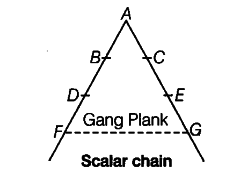 In the figure shown, F and G can directly communicate in case of urgency, as per the concept of Gang Plank, without following the formal lines of communication.