Explain how the sex of the child is determinated at the time of conception in human beings. 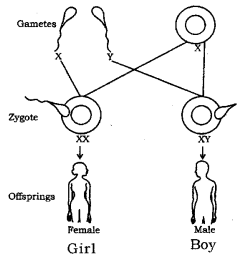