Explain how rusting of iron is envisaged as setting up of an electrochemical cell?

In corrosion, a metal is oxidized by the loss of electrons to oxygen with the formation of oxides. So, an electrochemical cell is set-up, e.g. rusting of iron involves the following steps :
(i) The water layer present on the surface of iron dissolves acidic oxides from air like CO _{ 2 } and forms acid to produce {{H}^{+}} ions.

(ii) In the presence of {{H}^{+}} ions, iron starts losing electrons at some spot to form ferrous ions. The spot behaves as anode.

(iii) The electrons released at anode move to another spot where H+ ions and the dissolved oxygen gain these electrons. This spot becomes a cathode. 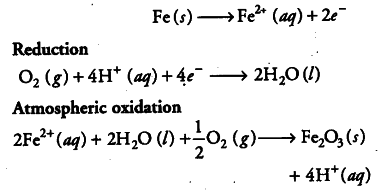