Principle: The principle of froth floatation is that sulphide ores are preferentially wetted by pine oil, whereas the gangue particles are wetted by water.

Collectors are added to enhance the non-wettability of the mineral particles. Examples of collectors are pine oil, fatty acids and xanthates. Froth stabilisers are added to stabilise the froth. Examples of froth stabilisers are cresols, aniline. If two sulphide ores are present, then it is possible to separate the two sulphide ores by adjusting the proportion of oil to water or by adding depressants. Example: For an ore containing ZnS and PbS, the depressant used is NaCN. It selectively prevents ZnS from coming to froth but allows PbS to come with the froth.

This method employs a mixture of water and pine oil which is made to froth in a tank to separate sulphide ores. The differences in the wetting properties of the ore and gangue particles separate them. 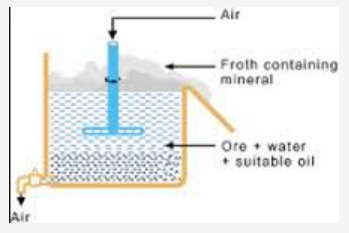 A mixture of water, pine oil, detergent and powdered ore is first taken in a tank. A blast of compressed air is blown through the pipe of a rotating agitator to produce froth. The sulphide ore particles are wetted and coated by pine oil and rise up along with the froth (froth being lighter). The gangue particles wetted by water sink to the bottom of the tank (water being heavier). Sulphide being more electronegative attracts the covalent oil molecules. The gangue being less electronegative is attracted by the water. The froth containing the sulphide ore is transferred to another container, washed, and dried.