Explain clearly, with examples, the distinction between:

(a) Magnitude of displacement or distance covered by a body in a given time interval is the difference between the initial and final positions of the body. It can be expresse 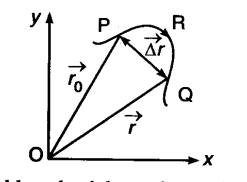 The average velocity does represent us whether the motion of the particle was actually along the path PQ or along PRQ and whether the motion between t1and f2 was steady or not. Average speed is defined as the ratio of the total distance covered by the body to the toted time taken. E.g., suppose a person goes to a temple 1 km away from his house and comes back taking 1 hour to perform the journey both ways.
Average speed of the man = 1+1/1=2km/h
But average velocity is zero because his displacement during the time of 1 hour is zero.
So, in either case (a) and (b) the second quantity is either greater them or equal to the first quantity. Equality sign is correct when displacement is equal to the distance. It holds when body moves along a straight path