Explain briefly the alternation of generation in bryophytes

Alternation of Generations:
(a) The life cycle of moss represents two distinct generations : gametophytic and the sporophytic.
(b) Moss plant is a gametophyte.
© Spore is the beginning of the gametophytic generation. 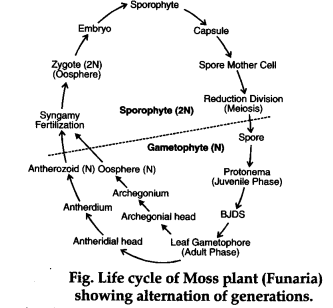 (d) It develops into protenema which gives rise to male and female gametophytes.
(e) Gametophyte (haploid) consists of green thallus having archegoniophores and antheridiophores which bear sex organs and the gametes are produced in them either in monoecious or dioecious plants.
(f) Club-shaped antheridium bears biflagellate sperms or antherozoids.
(g) Flask shaped archegenium encloses the female egg.
(h) Zygote is formed after the fertilization (syngamy) of male and female gametes with the help of water.
(i) Repeated divisions of the zygote give rise to the embryo (2N) which soon develops into sporophyte.
(j) The sporophyte of moss gets differentiated into three parts-foot, seta and capsule. Inside the capsule single celled spores are produced.
(k) After the dehiscences, they begin to germinate and give rise to the protonema to start the cycle again.
(l) Gametophytic generation alternates the sporophytic generation.