The nitrogen cycle is the process by which nitrogen is converted between its various chemical forms.

The features of the nitrogen cycle are-

(i)Nitrogen fixation-Atmospheric nitrogen must be processed, to be used by plants.
(ii)Assimilation-Plants can absorb nitrate or ammonia from the soil via their root hairs. If nitrate is absorbed, it is first reduced to nitrite and then ammonia.
(iii)Ammonification-Bacteria, or fungi in some cases, convert the organic nitrogen into ammonium, a process called ammonification.
(iv)Nitrification-Conversion of ammonia to nitrate is performed primarily by soil-living bacteria and other nitrifying bacteria.
(v)Denitrification- Denitrification is the reduction of nitrates back into the largely inert nitrogen gas, completing the nitrogen cycle which is performed by Clostridium in anaerobic conditions. 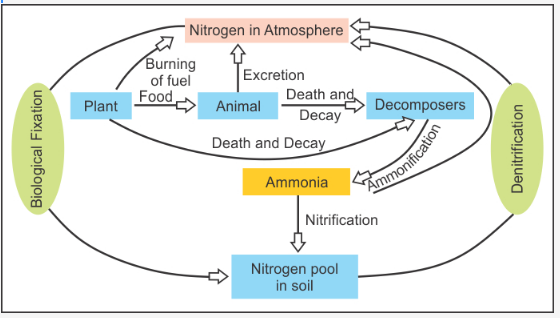