Fundamentals
In elimination, final product is alkene which is formed following Saytzeff rule which states that more substituted alkene is more stable.

Mechanism for the reaction will be E1 and formation of alkene take place by following Saytzeff rule.

Explanation:
In present case, alkyl halide is tertiary therefore, carbocation formation is favored. Mechanism can be

depending on nature of nucleophile. Nucleophile is

which is strong base therefore, E1 will be favored. 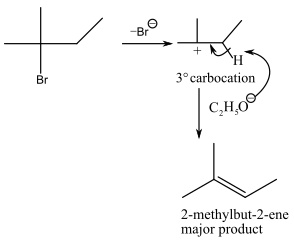 There could be another possibility but the product (2-methylbut-1ene) so formed is less substituted alkene therefore less stable or minor product.

Explanation:
In this reaction, ethoxide ion is a strong base therefore, elimination reaction take place which results in the formation of more substituted double bond according to Saytzeff rule, therefore, major product is as follows: