Distinguish between concave and convex lens

Distinguish between concave and convex lens 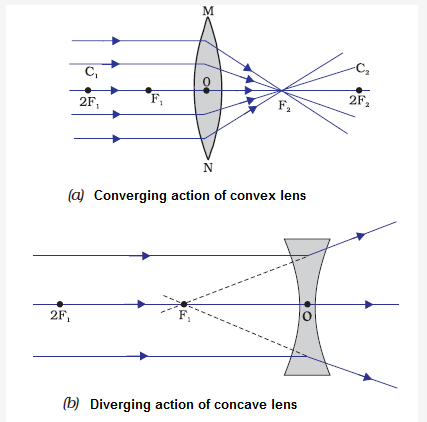 Convex lens has the property of converging the parallel rays to a focal point. Diverging lens has the property of diverging the parallel rays and makes it to appear that all the rays are emerging from focal point as shown in figure. Due to this converging action, it is possible to get real image of an object using convex lens. (Real image means that image can be captured on a screen).

Magnification depends on the distance between object and lens. It is not possible to get real image of an object using concave lens alone, due to its diverging action. Concave lens always gives virtual and diminished image.

Physically, convex lens is thick at middle region and thin at edge. Concave lens is thin at middle region and thick at edge.
If we want to distinguish convex lens and concave lens without touching, we place the lens on top of newspaper or book.
If the letter size appears smaller than its real size, then the lens is concave. If letter size appears larger than the real size, then the lens is convex.