Simple Epithelium : The simple epithelia consists of a single layer of cells, resting on a basement rmembrane. They cover moist surface, where there
is little wear and tear by fricton, simple epithelia are further divided into five types :
(a) Simple Squamous Epithelium: It is formed of thin, flat, disc like polygonal cells, closely fitted like the ’ tiles in a floor. The nuclei of the cells are flattened and often lie in the centre of the cell. The squamous
epithelium lines the Bowman’s capsules of the urinary tubules, terminal bronchioles and alveoli of the lungs.
(b) Simple Cuboidal Epithelium : This epithelium consists of square or cubical cells with almost equal height and width. The cells look like polygonal in surface view. The cells of cuboidal epithelium often form microvilli on their free surface. Microvilli increase absorptive surface area. The cuboidal epithelium lines the small salivary and pancreatic ducts, thyroid vesicles, parts of internal ear.
© Simple Columnar Epithelium : It consists of elongated cells which are placed side by side like column. The nuclei are somewhat elongated along the long axis of the cell and may have a variable position. Certain cells of this epithelium contain mucus (a slimy substance) and are called goblet cells, as they look like goblet. The columnar epithelium lines the stomach, intestine and gall bladder.
(d) Simple Ciliated Epithelium : This epithelium consists of cells bearing cilia on their free surfaces. Mucus secreting goblet cells almost invariably occur at intervals among the ciliated epithelium. The cilia of the epithelial cells remain in rhythmic motion and create a current to transport the materials which come in contact with them.
(e) Pseudostratified Epithelium : This epithelium is made up of a single layer of columnar cells. But it appears two layered. Mucus secreting goblet cells also occur in this epithelium. 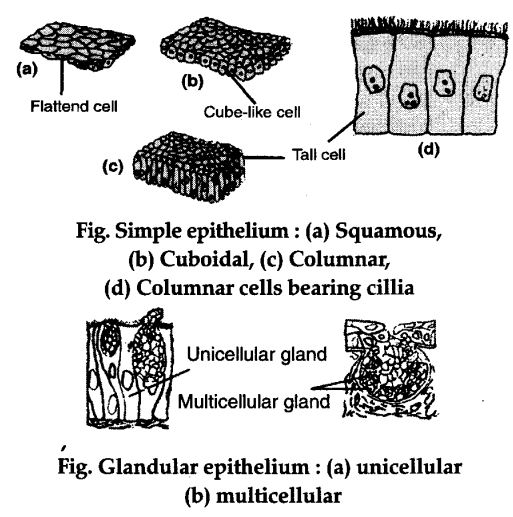