Describe the sub-phases of prophase I of meiosis I

Prophase I of meiosis I : It is more complicated and prolonged as compared to the similar stage of mitosis. It may be divided into the five sub-phases - Leptotene, zygotene, pachytene, diplotene and diakinesis.
(i) Leptotene or leptonema : (a) It is the first stage of meiotic division following the interphase, (b) The chromatin fibres of interphase nucleus gets shorten and elongated, chromosomes become clear, © Each chromosome appears to be longitudinally single. The chromosomes bear a series of dense granules called chromosomes, (d) In many animal cells, one of the two centriole pairs begin to move to the opposite side, (e) Both the centriole pair and its astral rays together constitute aster, (f) There are two sets of chromosome^ in a cell undergoing meiosis, i.e., the chromosome number is diploid.
(ii) Zygotene or zygonema : (a) The homologous chromosomes come to lie side by side and get attached laterally due to the development of nucleoprotein between them, (b) Pairing is such that the genes of the same character present on the two chromosomes come to lie exactly opposite, ©
This pairing of homologous chromosomes is called synapsis or syndesis, (d) On account of synapsis, chromosomes form pairs or bivalent. The number of bivalents is half number of the total chromosomes.
(iii) Pachytene or pachynema : (a) The paired chromosomes or bivalent become short and thick The chromatids of each paired chromosomi slightly separate and become visible. Thus, each bivalent or chromosome pair is made up of actually four chromatids, two of each chromosome, (b) Each group of four chromatids is referred as tetrad. During pachytene, there occurs exchange of thib corresponding segments non-sister chromatids of homologous chromosomes. This process is called crossing over, © Crossing over takes place by breakage and reunion of chromatid segments, (d) After crossing over, the two chromatids of a chromosome become dissimilar.
(iv) Diplotene or Diplonema : (a) The nucleoprotein fusion complex of the synapsed chromosomes dissolves, (b) The homologous chromosomes start separating except in the region of crossing over, © The points of attachment between the homologous chromosomes are called chiasmata.
(v) Diakinesis: (a) The chromosomes condense further
to acquire characteristic size and form, (b) The chiasmata disappear by sliding towards the ends of the chromosomes, © The nucleolus/nucleoli disappear, (d) Nuclear envelope breaks down into vesicles. 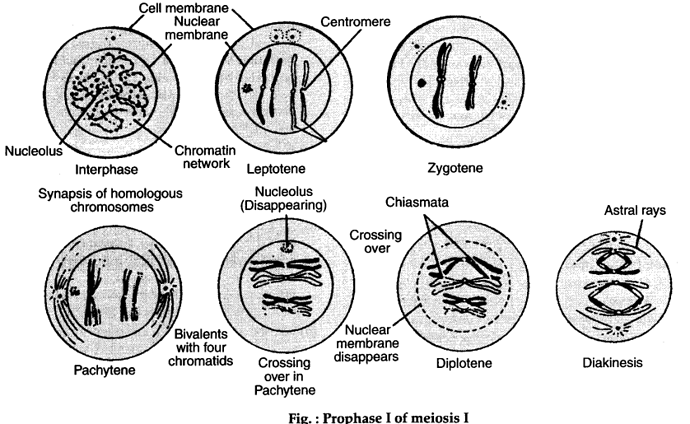