Centrosome : (i) Centrosome is an organelle usually containing two cylindrical structures called centrioles.
(ii) They are surrounded by amorphous pericentriolar materials.
(iii) Both the centrioles in a centrosome lie perpendicular to each other in which each has an organisation like the cart wheel.
(iv) They are made up of nine evenly spaced peripheral fibrils of tubulin.
(v) Each of the peripheral fibril is a triplet. The adjacent triplets are also linked.
(vi) The central part of the centriole is also proteinaceous and called hub, which is connected with tubules of the peripheral triplets by radial spokes made of protein.
Centrosome

(vii) The centrioles form the basal body of the cilia or flagella, and the spindle fibres that give rise to spindle apparatus during cell division in animal cells
Nucleus : (1) The nucleus is a large organelle controlling all the activities of the eukaryotic cells.
(2) The nucleus is bounded by two membrane, which make the nuclear envelop.
(3) The outer and inner membranes are separated by a narrow space called perinuclear space.
(4) At some points, the nuclear envelop is interrupted by the presence of small structures called nuclear pores.
(5) Nucleolus is a rounded structure and is the site for ribosomal RNA synthesis.
(6) The space between the nuclear envelope and the nucleolus is filled with a transparent fluid called nucleoplasm.
(7) The nucleoplasm contains chromatin which is a DNA-protein complex.
(8) Nucleus is the seat of heredity 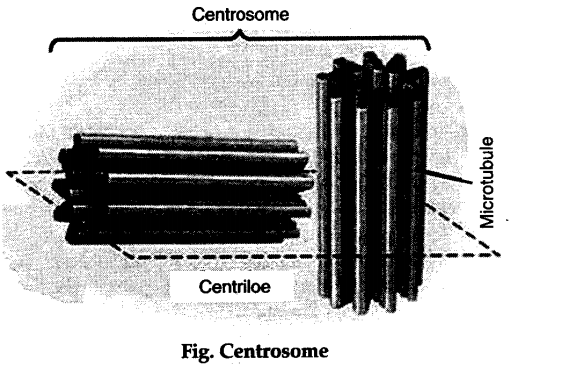 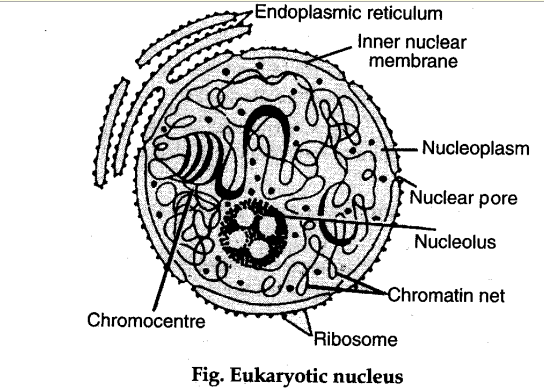