Describe the structure of cell wall

The cell wall is differentiated into three parts- middle lamella, primary wall and secondary wall.
(1) Middle lamella : (a) It is a thin amorphous cementing layer between two adjacent cells,
(b)It is the first layer, which is deposited at the time
of cytokinesis, © It is composed of calcium and magnesium pectate.
(2)Primary wall: (a) It is commonly thin, elastic and extensible in growing cells, (b) It grows by addition of wall material within the existing one. Such growth is termed as inter susception. © This wall consist of a loose network of cellulose microfibrils.
(d) These microfibrils in fungi are made up of a polymer of acetyl glucosamine, (e) The matrix of wall is chiefly composed of water, hemicellulose,
pectins and glycoproteins.
(3) Secondary wall : (a) After maturity, a thick secondary wall is laid inner to the primary wall by accretion or deposition of materials. It is found in many layers. 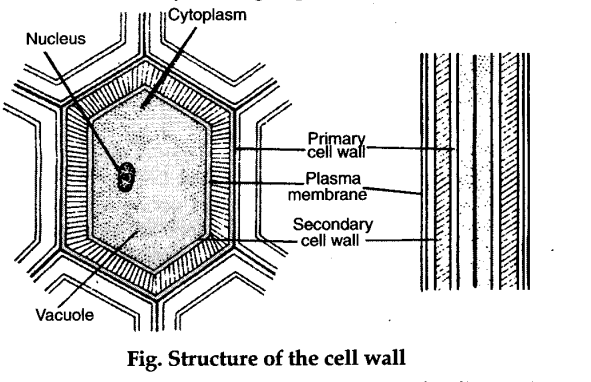