Describe the microscopic structure of a neuron. Also draw its diagram

The nervous system is made up of highly specialized cells called as neurons. A neuron is composed of three main parts, namely cell body or cyton, dendrite and axon.
(a) Cyton : It contains a well defined nucleus, surrounded by granular cytoplasm called neuroplasm and all the cell organelles like mitochondria, golgi complex, Nissl’s granules, rough endoplasmic reticulum etc. Only centrosome is absent because nerve cells have lost the ability to divide.
(b) Dendrites : These are branched cytoplasmic projections of cyton known as the dendrons which receives nerve impulses at the branches called dendrites. 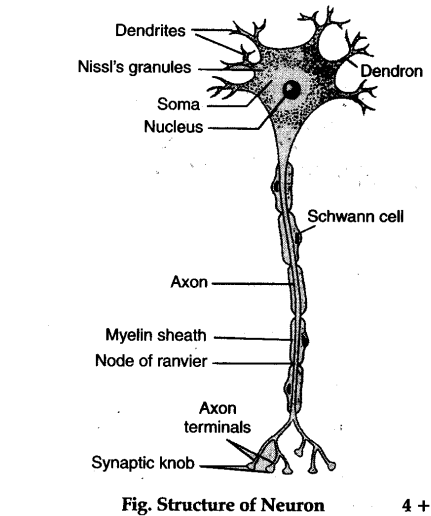 © Axon : It is a very long process and projects from a part of cyton axon hillock. The lower end of the axon is branched and each branch terminates as a bulb like structures called nerve endings which have swollen synaptic knobs or vesicles, which store category of chemicals called neurotransmitters. The axons transmit nerve impulses away from the cell body to a synapse or to a neuromuscular junction.