Describe the infrastructure and main functions of centrioles and basal bodies

Centrioles and Basal Bodies : Centrioles are cylindrical structures approximately 0.15 in diameter and about 0.03 to 0.5 in length. They i appear as small granules associated with a meiotic spindle during cell division. They occur in all lower plants, protozoa and higher animals.
infrastructure : (a) Under the electron microscope, each centriole is seen to be formed of nine sets of tubular structure arranged in circular fashion.
(b) Each of these sets is a triplet composed of three microtubules. Each microtubule has a diameter of j about 250 A. The triplets are found in the matrix.
© Sometimes delicate strands appear to connect sets
of the triplets to each other. Also, from the central core of the cylinder, delicate strands connect sets jof the triplets to each other giving a cartwheel S appearance.
(d) Basal bodies are structures similar to the centrioles.
They produce cilia and flagella.
Functions of Centrioles :
(a) Centrioles are the self-duplicating bodies. They contain DNA and RNA.
(b) The centrioles which give rise to cilia and flagella
are known as basal bodies.
© Out of the two centrioles in the sperm, the distal centriole forms the axial filament. 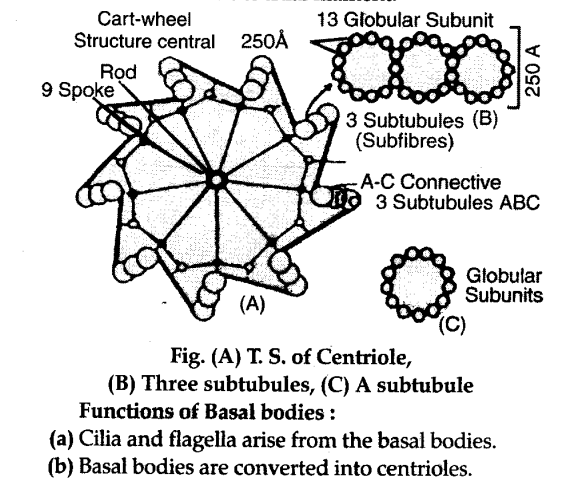