Describe the histological structure of spinal cord in human

. Histology of spinal cord in human:
(a) It is a cylindrical structure which is connected with the brain at medulla oblongata.
(b) The spinal cord runs through the length of vertebral column inside its cavity.
© The spinal cord is a hollow structure containing a cavity called the central canal.
(d) It has H-shaped central core of grey matter made up of nerve cell bodies, dendrites and synapses enclosing the central canal.
(e) The white matter provides an outer layer. .
(f) The grey matter is divided into horns. Close to front of spinal cord is ventral (anterior) grey horn and close to back are dorsal (posterior) grey horn.
(g) Between ventral and dorsal grey horns are lateral gray horns.
(h) The nervous matter of the spinal cord is divisible into central grey and peripheral white matter.
(i) The grey matter contains intemeurons, motor neurons, cell bodies and dendrites. The peripheral region of the spinal cord forms the white matter. It contains nerve axons which transmit nerve impulses between different levels of the spinal or between cord and the brain. 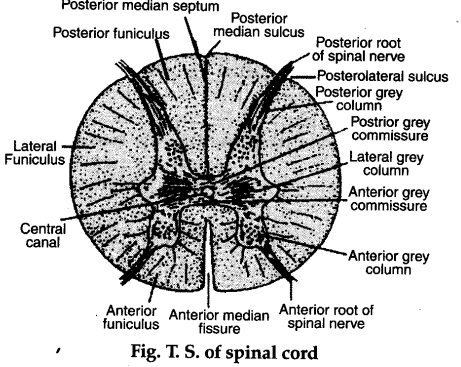 (j) The spinal white matter contains many tracts, some descending to convey information from the brain to the spinal cord, others ascending to transmit impulses in the opposite direction.
(k) The effect or fibres leaves the spinal cord on the front side via the ventral roots. These are motor in nature.
(l) The two roots ventral and dorsal immediately after leaving the the cord, join at the same level to form a spinal nerve
(m) In man, 31 spinal nerves originate from the spinal cord