Describe in brief the role of (i) testis

(ii) Seminal vesicle: This is a pair of male reproductive glands present between the rectum and urinary bladder. It secretes seminal fluid which is alkaline and neutralises the acidity of urine and activates sperms.

(iii) Vas deferens: It is called sperm duct. It is a long tube which joins testes with another tube named urethra coming from the bladder. The sperms formed in the testis are delivered through the vas deferens to urethra.

(iv) Ureter: A pair of long, narrow, thin-walled and tubular structures that start from hilum of kidneys, run downward and open in urinary bladder. They conduct the urine from kidneys to urinary bladder. 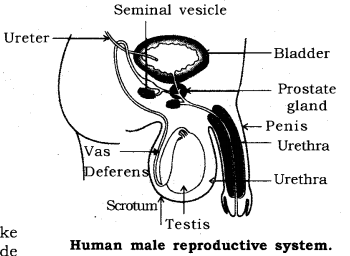