Meiotic division takes place in germ cells. The number of chromosomes is reduced to half in daughter cells.
Meiotic cell division is divided into two phases, i.e., meiosis-I and II.
In the meiotic-I division, the homologous chromosomes pair to form bivalent. Exchange of genetic material takes place. The chromosomes now separate and get distributed into daughter cells.
Long prophase-I is divided into five sub-stages, i.e., leptotene, zygotene, pachytene, diplotene and diakinesis. During metaphase-I, the bivalents arrange themselves on equatorial plate with their arms on the plate but the centromere is directed towards opposite pole. It is followed by anaphase-I. Now, the homologous chromosomes repel each other, move to the opposite poles with both their chromatids. In this way each pole gets half the chromosomes number of the parent cell.
In telophase-I, the nuclear envelope and nucleolus again appear. The centromere of each chromosome breaks, separating the chromatids, one each to a daughter cell. The meiosis cell division maintains chromosome number of a species.
As a result of meiosis division, the four daughter cells are formed with half the chromosome number (haploid) in each cell. 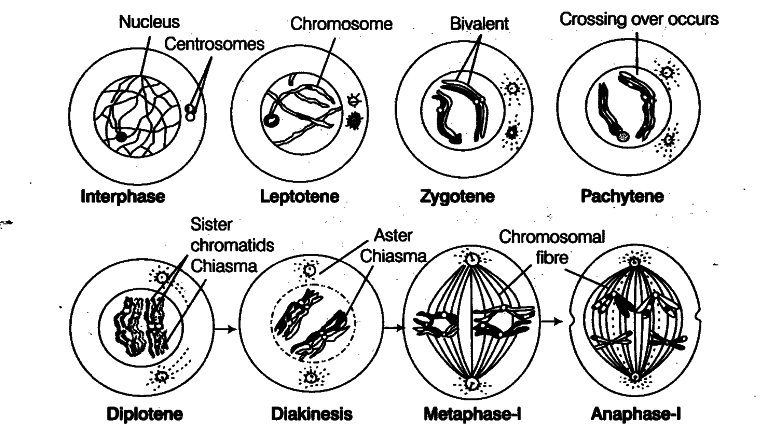