Can a flight of a bird an example of composition of vectors. Why?

Yes, the flight of a bird is an example of composition of vectors. As the bird flies, it strikes the air with its wings W, W along WO. According to Newton’s third law of motion, air strikes the wings in opposite directions with the same force in reaction. The reactions are OA and OB. From law of parallelogram vectors, OC is the resultant of OA and OB. This resultant upwards force OC is responsible for the flight of the bird. 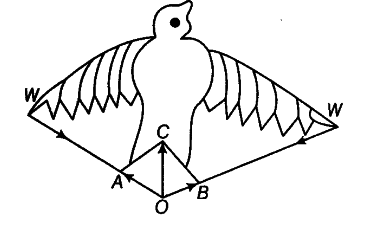