Answer the following questions given

Answer the following questions :
(i) A magnetic field that varies in magnitude from point to point but has a constant direction (East to West) is set up in a chamber. A charged particle enters the chamber and travels undeflected along a straight path with constant speed. What can you say about the initial velocity of the particle?
(ii) A charged particle enters an environment of a strong and non-uniform magnetic field varying from point to point both in magnitude and direction, and comes out of it following a complicated trajectory. Would its final speed equal to the initial speed, if it suffered no collisions with the environment?
(iii) An electron travelling West to East enters a chamber having a uniform electrostatic field in North to South direction. Specify the direction in which a uniform magnetic field should be set up to prevent the electron from deflecting its straight line path.

(ii) Yes, the final speed be equal to its initial speed as the magnetic force acting on the charged particle only changes the direction of velocity of charged particle but cannot change the magnitude of velocity of charged particle.
(iii) As, the electric field is from North to South, that means the plate in North is positive and in South is negative. Thus, the electrons (negatively charged) attract towards the positive plate that means move towards North. If we want that there should be no deflection in the path of electron, then the magnetic force should be in South direction. 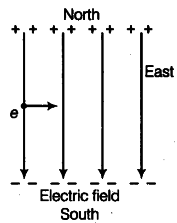