The central I atom has the ground state electronic configuration as 5${{s}^{2}} 5{{p}^{5}}. It involves s{{p}^{3}}d hybridization involving one 5s, three 5p and one vacant 5d orbital. T'he half filled {{p}^{3}}d hybrid orbital forms a covalent bond with one atom and an empty {{p}^{3}}$d hybrid orbital accepts an electron pair from I~ ion to form a coordinate bond. Thus, the geometry of the molecule is trigonal bipyramidal in which three positions are occupied by lone pairs. 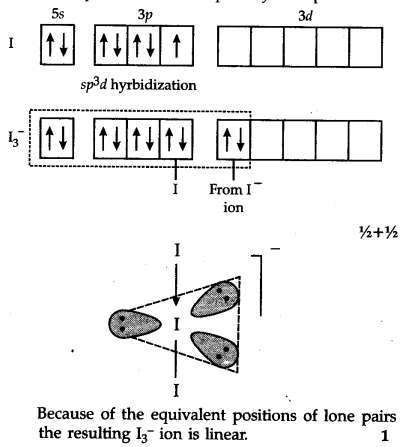